Yep, it’s true…. Knox GETS to rock a helmet for a few months to round out his flat noggin’. We’ve suspected for a couple months that he would land in one after doing everything we could with no success to round it on our own. When we noticed the back of his head was pretty flat (around two and a half to three months), we bumped up the tummy time and did everything we could to get him off of it. It sort of rounded out in the bottom but not much. At about 5.5 months, we went to the surgery clinic at University Hospital where they did a scan of his head and definitely suggested helmet therapy after diagnosing him with plagiocephaly (flat-head syndrome). After the “back is best” campaign, the numbers of kiddos with this condition increased and it is said that 47% of babies have or will have plagiocephaly.

Now, I won’t lie…even though I knew it was likely coming, the news crushed me. Selfishly (or not?), I love to kiss all over his head and HE loves to snuggle his (big) head into the crook of my neck. He’ll wear the helmet 23 hours a day, which means that these snuggles and kisses will just have to be crammed into the one hour a day where he gets to be without it. Knox also takes after his Dad and sweats a lot…even inside at 70 degrees. A helmet in the summer isn’t the ideal accessory for my dude but we’ll drill a few extra holes into it and hope these last few smoldering weeks pass quickly!

I’m sure we’ll get plenty of questions as to ‘why’ he’s in the helmet – and let me just be clear – it is NOT because he was neglected (as the Internet would want you to believe). The kid has slept solid chunks since early on (well, minus that 4-month regression) and is a clear back sleeper, now sleeping 11-12 hours a night. I’m sure this has a LOT to do with his head shape because trust me, when he’s awake, he is held and loved and played with (probably too much honestly). I’ve cried several times in the weeks leading up to the helmet worried what people will think. Of me. Of my mothering. Of my child. Will they assume I didn’t care for him enough and just left him laying down all day? Will they think he spent too much time in “devices?”  Will people make judgy comments toward him/us? (Note: If a person so much as looks at Knox, he smiles a big, toothless grin so hopefully anyone silly enough to send a negative/unwanted comment our way will be shot down by my child’s absolutely joyful demeanor.) (Note to Note: He does NOT have a joyful demeanor when hot, tired, or hungry.)

We’ve heard from several other “helmet alums” that it was the BEST choice they made for their baby and that the time absolutely flew by. It was a no-brainer for us to proceed with the helmet therapy to correct his noggin’. I mean, all I could picture was Knox’s soccer team winning a state championship one day and shaving their heads and my poor 17 y/o boy having the flattest head on the team….. Nope – Helmet it is! If prayer is your thing, pray that he can stay cool in his new accessory. That’s really our only worry as he’s already adjusted super well to it! And please, if you see us out and about, come say ‘hi’ to the cutest dude around!

His smile (ESPECIALLY in the helmet) is sure to brighten your day! 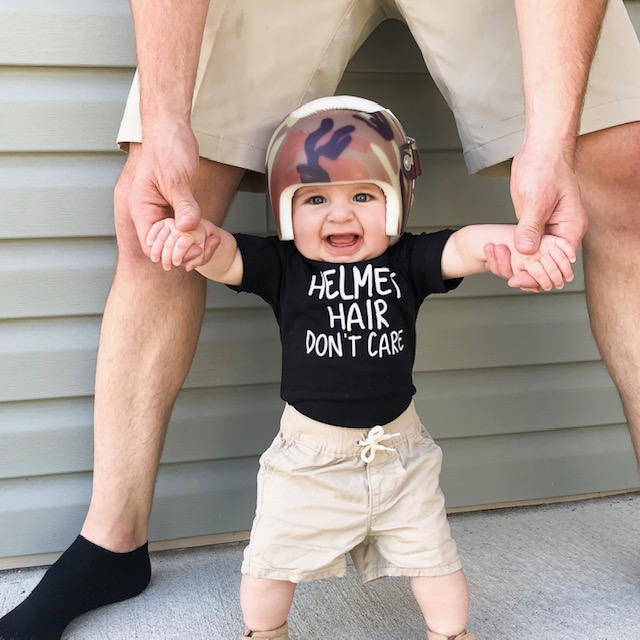