If you follow me on Instagram, you no doubt know who “Mollie Knierim” is and if you want to see some good pics, go ahead and follow #goodgollymissmolliek. I can’t help it, she’s super cute, okay? Maybe when we have a human child, I’ll switch it up some, but let’s be real, I’ll probably overdo posts of future-human-child too. (note: said future-human-child is still hypothetical). I also really can’t believe it’s taken me an entire year to write a blog about my homegirl. TIME FLIES WHEN YOU’RE HAVING FUN.

When we got married, I snuck “I vow to get us a dog” into Tyler’s vows. It was a joke (kinda) since I had been nagging him relentlessly to get a puppy for months. I really DIDN’T expect it to happen only a month after the big day, but it did. My mom and I went to Target one afternoon and just wanted to pop in the shelter (terrible, terrible idea if you aren’t serious about looking btw). I vividly remember her saying, “Why are you doing this to yourself?” I really wasn’t expecting to find a dog that day. I really wasn’t even looking. (That’s what I tell myself). We had come to terms that our lives were just TOO busy to train a puppy and give it the devotion it needs to be well-behaved. I won’t lie, I was 100% still struggling with the idea of an “adult dog” but knew for sure we wanted to adopt. Let’s just say, I instantly fell in love. 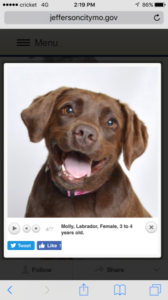 Mollie was sitting in her kennel, absolutely silent. I was immediately drawn to her because 1) she was cute and chubby but 2) she wasn’t barking. EVERY other dog in that place was going crazy, but not our Mollie (then spelled Molly). A sign on her kennel said “The dogs in my former home were too energetic for me.” I snapped a picture of her, just chillin’, to Tyler and said, “This dog is perfect for us.” I really, truly didn’t think much of it (and maybe I was trying to play it cool to see what he would say). I don’t remember his reply but the next night we were out Jeeping and he said, “Well, today I did a thing.” I assumed he bought new Jeep parts or something but he told me about how he went to the shelter on his own to check her out and see what he thought. My mouth dropped, I started doing the thing where I get excited realllly fast and my words turn to mush. I don’t remember much of the conversation except for that we decided we would go hang out with her promptly at 12pm when the shelter opened the next day to “test it out”.

The ride to meet & adopt Mollie:

“If she isn’t there, we’ll just know it wasn’t meant to be.”

“If she’s aggressive or anything, we’ll have to pass because we want kids one day.”

“What if she has bad habits we can’t break?”

“If we get her, we probably can’t change her name so it’s not too hard for her to adjust.”

“Are you sure you’re okay with an adult dog?”

“If someone else adopted her, we’ll be happy she got a home and take it as a sign we aren’t ready.”

Whew, she was there. We got her out and “played” with her for several hours in their courtyard. She was docile, quiet, and just too cute for words – that puppy face!! After much deliberation (over Popeye’s), we decided adopting an “adult” dog was the perfect choice for us (plus, our couch is dark brown so it was really fate).

It’s hard to remember life before Mollie and I’m sure I’ll write this same thing one day in a blog about kiddos. I can’t say enough about our experience adopting an adult dog & feel 95% certain we’ll always go this route in the future. I joke that it’s the “lazy way” but I know there’s a number of adult dogs waiting to be rescued that would LOVE to prove to you that it’s the BEST way! 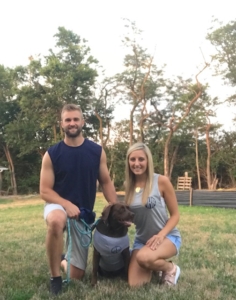 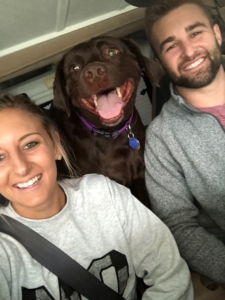 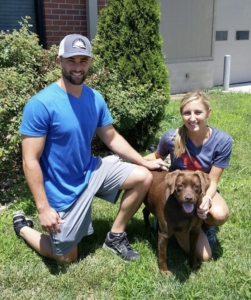 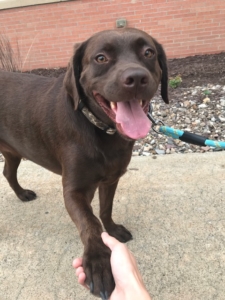 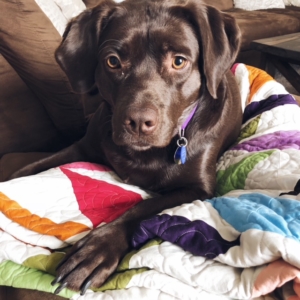